Schools for Schools benefit dinner set for Thursday in Vail

VAIL, Colorado ” Schools from Eagle County will be hosting a benefit dinner on Thursday at the Donovan Pavilion from 7 to 10 p.m. The cost is $30 and the money raised will go to helping rebuild schools in northern Uganda that have been destroyed by war, and to provide an education for refugees of the genocide in Darfur. The program is called Schools for Schools and is a fundraiser through Invisible Children. There will be dinner (buffet style), a silent auction, entertainment and information about the fundraiser.

Schools for Schools raises money for the schools in Northern Uganda, improving the quality of education for war-affected students. This is in correlation with the non-profit Invisible Children. Invisible Children was an organization started with the mission to improve the standards of education and student mentorship in Northern Uganda, Africa. This organization helps raise money for war-stricken schools that have been deprived of resources and proper facilities.

Harper Kaufman, a Vail Mountain School student, took the initiative to register her school and bring awareness to the needs of the students in Uganda. She believes that the youth of Eagle County can make a huge difference in the lives of students in Africa.

“Our mission not only includes raising funds and collecting books, but to raise awareness around the valley,” Kaufman said. “Working with Battle Mountain is great because it brings even more students together to unite over working towards education in Uganda.”

The Battle Mountain High School Student Council started a fundraiser last year for an organization called STAND (a student anti-genocide coalition) in which the effort was focused on the Darfur area. Students were more than willing to take part in the important role to actively work to change the world since they are familiar with the struggles schools are having in Africa.

“Most of the refugee’s that were displaced from the Darfur area are now in Northern Uganda,” said Sage Nelson, Battle Mountain High School student council sponsor and special education/mentor teacher.

Currently, Battle Mountain High School and Vail Mountain School are two of the 2,013 schools that have registered to help Schools for Schools, and the number continues to grow. Both schools are raising money and collecting books for Gulu High School and their need for water and sanitation, books and resources, a dormitory and teacher training and supplies.

“Schools for Schools are helping schools in Northern Uganda, where several refugees from Darfur are trying to earn an education,” Johnson said. She plans on attending college and studying abroad to see the improvement first-hand. “Projects like these have also inspired me to do more hands on work in a program like the Peace Corps.”

The war in Northern Uganda has been called the most neglected humanitarian emergency in the world today. For the past 23 years, the Lord’s Resistance Army (LRA) and the Government of Uganda (GOU) have been waging a war that has left nearly 2 million innocent civilians caught in the middle. The GOU’s attempt to protect its citizens from this rebel militia has largely failed, leaving an entire generation of youth that has never known peace.

For more information or to purchase tickets for the dinner, contact Nelson at Kimberly.nelson@eagleschools.net. For specific information on Gulu High School, visit http://s4s.invisiblechildren.com/school/gulu-high-school.

What: Schools for Schools benefit dinner 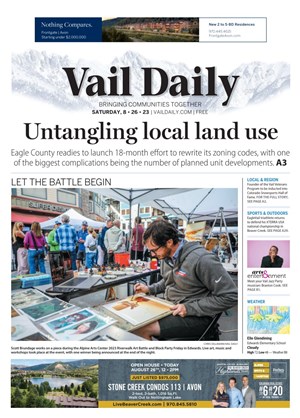